Windows 8 has been a bit of a dud for Microsoft. Partly this was because it offered the average user few compelling reasons to upgrade from the already excellent Windows 7, but a lot of the blame had been placed on the new Modern UI interface, which boldly displays apps in a full screen menu, a change which didn’t sit well with desktop and laptop owners accustomed to the traditional desktop.

But while those people using Win 8 on a system without touch support may not have been impressed, Windows 8 Modern UI is a huge improvement for tablets, where its full-screen interface and hot-spot menus make perfect sense.

These new Windows 8 tablets are particularly intriguing when you consider that not only do they support hardware keyboard accessories, but they can also run all your favourite Windows applications. That’s a pretty interesting proposition for business users. 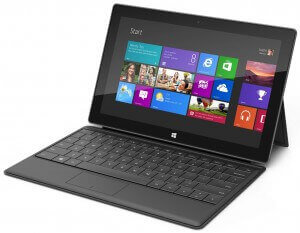 Windows 8 has heralded a new generation of tablets and laptops designed to be used as both touch devices and full-blown laptops.

Microsoft’s own Surface RT and Surface Pro tablets, and many other models, feature keyboard dock add-ons which simply plug into the bottom of the display to give you a proper hardware keyboard and mouse pad, just like a laptop.

That eliminates the most problematic part of using a tablet for serious work: the on-screen keyboard. Software keyboard solutions are just not comfortable enough for large amounts of typing, and they lack the tactile feedback and responsiveness required by touch typists.

You’ll also find an increasing number of convertible laptops on the market. They resemble the compact ultrabooks popularised by the Apple MacBook Air, but these devices feature a screen hinge which allows the display to fold down over the keyboard, giving you a tablet form factor when required.

Windows software on a tablet

While having a proper keyboard is good, it’s the software support that makes a Win 8 tablet a potentially killer business machine.

Despite its radical new interface, Windows 8 is still good old Windows under the hood, so all the usual software will run as normal. The Apple iPad and Android tablets are often lauded for their extensive app stores, but Windows 8 supports a massive amount of software, even old programs going back to the days of Windows XP (or further, if you’re feeling brave).

That’s a big advantage if you require easy access to documents and images, since you can install popular tools like MS Word or Adobe Photoshop. Trying to do the same thing on a tablet with a mobile operating system can be extremely frustrating.

The new generation of ultra-thin laptops and powerful tablets has made it easier and more comfortable to work on the move, and Windows 8 tablets and convertible laptops offer a very attractive new spin.

If your experience with tablets is limited to the iPad or an Android device, then the option to run popular software tools is not to be underestimated. Rather than messing around trying to get that Excel spreadsheet to display, you can simply carry on reading, typing or editing just as you would with a standard desktop or laptop. That is something that the other platforms cannot match, even with their extensive app libraries.

Price is the biggest stumbling block. Win 8 devices in this class tend to be more expensive than the Apple or Google devices, but this is balanced by the wider capabilities and more powerful hardware. On a related note, battery life will be weaker, typically in the region of four to five hours rather than the ten hours or more of an iPad or Android tablet. But obviously that’s only an issue on longer journeys, and not as much of a problem now many trains have power sockets.

If your tablet needs lean more toward the entertainment side of things then you’ll be better served by the iPad or similar, if however you’re more concerned about getting business done on the move without lugging around a heavy laptop, a Windows 8 tablet should be very high on the shopping list.

Author Bio: This article was written by Matt Powell, who is the editor for the consumer broadband site Broadband Genie.