CT Business Travel has been presented with three new awards, two are in recognition of their outstanding performance in 2012, the third is a special contribution award for monies raised for Plan International – a charity that helps improve the quality of life for deprived children in developing countries.

The awards were presented at an event hosted by Uniglobe Travel, of whom CT Business Travel is a member. Thirty staff including Managing Director Mark Kempster attended the ‘Uniglobe Travel British Isles Regional Supplier Showcase & Gala Awards Dinner’, which took place on Saturday 23rd March 2013 at the Park Plaza in Victoria, London.

The event takes place every two years in the UK while every other year it is held in Europe, attendees at this year’s event were able to network during the day prior to attending the gala awards dinner in the evening, which was MC’d by actor Shaun Williamson for added entertainment, (he is best known for his role as Barry Evans in EastEnders, as well as playing a version of himself in the sitcom Extras by Ricky Gervais and Stephen Merchant).

CT Business Travel was nominated for nine awards in total and walked away winning three.

The awards it won were -

The final award was presented to Managing Director Mark Kempster by the President of Uniglobe British Isle’s Derek Hearl-Mounder in recognition of Mark’s contribution to the Inca Trail challenge and fund raising which took place last October 2012. The climb which included 10 participants raised a staggering £35,000 which went to a specific Plan International education project in Peru. 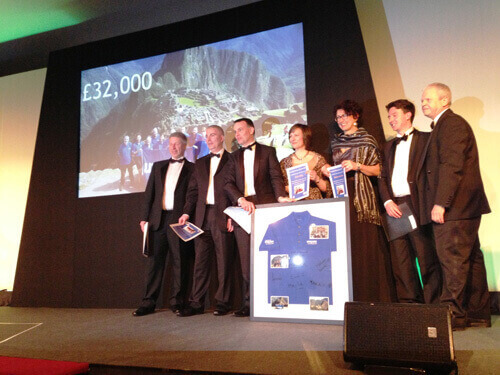 Commenting on the awards Mark said; “Being nominated for any award is hugely appreciated as it reflects the hard efforts the business travel team apply day-in, day-out, to then win three of the awards was simply terrific and I’m really pleased the team were with me to be able to enjoy the special occasion. We’re not here to win awards, but we certainly won’t say no to receiving them”.